Good morning, everyone. A journalist just asked me, “So you really came?” I answered, “My word is worth more than a thousand made-up controversies that make no sense, that have no foundation.”  We’re living in an incredible time. Last night I spent the night with my two children, and I asked myself, who, in 2019, in Italy and in the world, could be bothered by the word “mom” and the word “dad”? If the word “mom” and the word “dad” bothers someone, the problem is theirs, not ours.  Because really, we’re living in an incredible time. I’m here, not to take anything away from anyone. But I’m here in favor of the future. I see some protestors with their “polite” slogans; I’ve noticed a press campaign, and I’ll say that, as a journalist, once again I’m embarrassed to be a journalist. They speak a mixture of hypocrisy, ignorance, conformism, and political correctness. “Against!” They want everyone to be against. Ah, a vice premier who goes to a congress for families! And then even the Holy Father says, “I share the substance of what’s being said today.” Wow. Imagine that! I’m for, not against.  I’ll say it again: Everyone can do what they want with their private lives. Everyone can make love to whomever they want, go to dinner with whomever they want, go to the theater with whomever they want, go to the movies with whomever they want. I want to get the state out of stores and professional studios, including the studi di settore; there’s no way I want to bring the state into anyone’s bedroom. Everyone can do what they want in their own homes.  But my duty and my right—as a dad, as an Italian, as a man, as a minister of the government—is to defend the rights of those who don’t have a voice: the children. My duty is to put children back at the center, so they don’t become victims of the selfishness of grown-ups, or the objects of conflict between adults. The rights of the famil
Please subscribe or log in to read the rest of this content.
Categories: 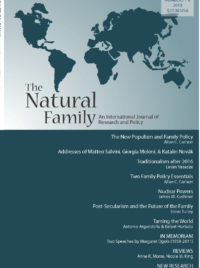