In recent decades, social scientists have accrued considerable evidence indicating that out-of-control preschoolers often mature into disturbed and disruptive adults. And now a new study has established that the toddlers headed for a lifetime of distress disproportionately come from single-parent households. Conducted by researchers at the University of Glasgow and national public-health agencies, this new study focuses on conduct disorder among preschoolers, especially “life-course persistent C[onduct]D[disorder]” of the sort that “emerges in early life and persists into adulthood with major adverse social, physical and health consequences.” “Difficulties present early in life,” the researchers explain, “are often predictive of behavioural problems and other negative health outcomes at later stages of childhood, adolescence and beyond.” To identify the circumstances in which young children are most likely to develop conduct disorder, the researchers pored over behavioral data collected for a nationally representative sample of 2,070 children at 34, 46, and 58 months of age. Statistical analysis of these data reveals that the children most likely to manifest signs of conduct disorder differ from their young peers in significant ways. These unruly children are, for instance, especially likely to come from homes where the mother smokes and from homes where parents believe in harsh discipline. But recent trends in family life make it particularly disconcerting that the Scottish researchers highlight family structure as a strong statistical predictor of persistent conduct disorder. Compared to children living with both parents, children living in broken homes appear more than four times as likely to manifest signs of persistent conduct disorder in a simple statistical comparison (Odds Ratio of 4.25). Even in a more sophisticated statistical model that takes into account household income and other background variables, children from non-intact fa
Please subscribe or log in to read the rest of this content.
Categories:

Orthodoxy Christianity has always declared that it must remain faithful to the ancient teachings of the Church and thus is forbidden to add or subtract anything from them. This is why the Orthodox Church has always considered itself the “Guardian of the Faith.” As Church scholar Paul Evdokimov has written: “[T]he unprejudiced observer will one […]

Serbian Patriarch: For us, Orthodox Christians, LGBTQ+ ideology is unacceptable 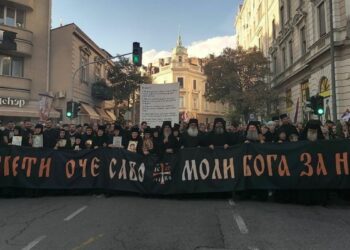 More than 100,000 people participated in the third Cross Procession for the salvation of Serbia in Belgrade. The organizers announced the next gathering for September 17, the same day when the so-called Europride is to take place.

Elena Gavrilova: a doctor who revealed shocking facts about abortion

According to the specialist, about 3 million abortions are performed annually in Russia, of which 200,000 are first-time pregnancies (official statistics indicate only about 500,000 abortions a year). And these figures do not include medical abortions up to 5-6 weeks and practically they also leave out data from private clinics.

“God created man as two sexes, as male and female, which means that marriage and family, from the beginning of the world until today and until the end of the world and time, are defined as the union of love of a man and a woman with their children.”